The 5 Biggest Benefits of E-Bikes

Electric bikes or ‘E-Bikes’ are growing in popularity year after year, and many might be wondering why that is. So let’s start by breaking down what an E-Bike actually is. Put simply, it’s a conventional bicycle that features an electric motor designed to help the rider achieve more power for the same effort.

There are numerous different types of E-Bike, with variations in power, range and battery life depending on the purpose of the vehicle, but the simple premise is the same: a cost-effective, energy-efficient and eco-friendly method of transportation.

Here, we dig deeper into the five amazing benefits of electric bikes.

The speed of a cyclist can depend on a few factors, including fitness, experience and terrain. While an experienced club cyclist can consistently reach over 25mph, the average rider usually maintains about half that speed on their daily commute using a conventional bicycle.

With up to 250w of power (around the same as a large fridge-freezer), an E-Bike can consistently maintain its legal UK limit of 15.5mph without any rider overexertion. E-Bikers are also permitted to utilise bike lanes and cycle paths to ease congestion on busy roads, allowing riders to avoid traffic and sometimes take a more direct route.

The result of E-Bike uptake could see riders reaching their destinations more quickly and with a better speed-to-energy ratio, making a faster commute or delivery run one of the benefits of riding an E-Bike. 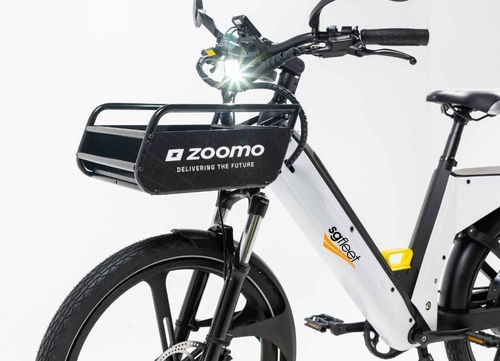 While an electric motor guarantees an increase in overall speed, it doesn’t negate the exercise benefits of riding an E-Bike, especially where novice cyclists are concerned. For example, a study from the University of Basel tested a cohort, half of whom used E-Bikes while the other half were given conventional bicycles.

After a month of usage, they monitored various health and fitness metrics of the participants. They found that E-Bike users had seen comparable improvements to those experienced by conventional cyclists.

This is because E-Bikes don’t reduce energy expenditure per se; instead, they ensure that the user gets more speed for each pedal push.

When considering using E-Bikes as an alternative option to cars, mopeds or public transport, users could see themselves making significant financial savings in the long run.

While it’s true that the upfront cost of purchasing an E-Bike can be an investment, with the average commuter-level E-Bike retailing for between £1,250-£3,000, this expenditure is quickly accounted for by their reduced running costs.

Petrol and diesel are costly in most countries, and unexpected price surges can hit your budget hard. To fully charge an E-Bike costs 7-10p   and should result in around 100 miles of range, giving you a rough economy of 0.07p/mile. Meanwhile, a mid-range family car could cost approximately £15 to cover the same 100-mile journey, a cost difference of over 2000%.

At SG Fleet, we’ve partnered Zoomo, allowing us to offer salary sacrifice E-Bike schemes to businesses of all sizes. This allows employees to save on their tax and National Insurance by leasing an E-Bike through their employer, as these plans take the lease payments before tax.

When you consider this, as well as the additional costs of insurance, tax, congestion charges or even public transport passes, long-term savings are definitely one of the most amazing benefits of electric bikes

António Guterres, the UN Secretary-General, warned at Cop27 that the ‘global climate fight will be won or lost in this crucial decade.’ Promoting an uptake of more sustainable methods of transport is vital if society is to retain the planet's health, and E-Bikes are definitely a move in the right direction.

The wattage needed to run an E-Bike is considerably lower than that required to run a motorbike or car and can be charged cheaply from any mains electricity outlet. On top of this, E-Bikes contribute positively to air quality and a reduction in fossil fuel output. When accounting for production and shipping, E-Bikes have an estimated carbon emission of 7g of CO2 per kilometre, compared with 116.3g CO2/km for the average EU car.

They’re growing in popularity in the delivery sector too. A growing number of organisations now carry out their last-mile delivery using E-Bikes, and here at SG Fleet, we’re very much a part of this trend. Our partnership with Zoomo. enabling us to provide green, last-mile delivery solutions through the use of E-Bikes.

With all of this in mind, the chance for a user or business to play their part in the ongoing struggle for a cleaner ecosystem is a great benefit of riding an E-Bike.

While in this context, using an E-Bike might not seem dissimilar from conventional cycling, the sense of achievement from partaking in physical exercise in a time-efficient way is definitely a significant benefit of riding an E-Bike.

Engaging the electric motor to give the user up to ten times the power from each pedal stroke can make a usually tedious or exhausting commute or delivery route into an efficient bike ride.

The effects of an outdoor, exercise-based commute are important, mainly revolving around the impact that physical activity can have on one’s mental health. Fresh air and energy expenditure release endorphins that result in a better mood, reduced stress, and healthier brain cells meaning a happier and more productive day. 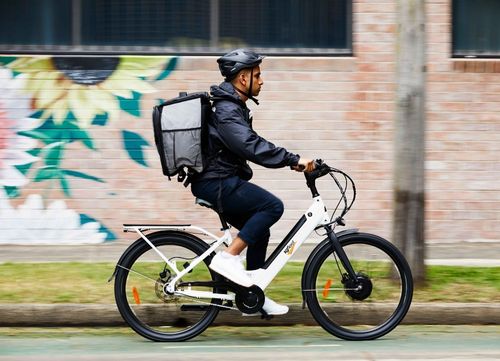 Want to find out how E-Bikes could benefit your business?

This year we invested in Zoomo to work towards eco-friendly fleet solutions and aim to introduce salary sacrifice schemes to make E-Bikes more viable for commuters.

Find out more about that here, or for a more detailed chat, feel free to get in touch.

- What Are The Benefits Of Employee Vehicle Leasing?

- Tips to Help Your Fleet Save Fuel